The second day of the festival didn’t not present any relief from the tropical heat. Record temperatures between 30-35 degrees C have been noted all over Sweden over the period of early May until this day. The arrangement adapted to this with water easily accessible to mix with beer, which is produced by a brewery, in which In Flames singer Anders Fridén has a part ownership.

It’s, of course, tough to be first out in the afternoon when In Flames will conclude the day. To be early this day to see Tribulation enter the stage was really a winner. The crowd not too complete yet, but instead a feeling came trough that the pure fans were there. The band was formed in Arvika in Värmland, Sweden, which made me particularly interested and proud. Interested because it was the first time seing them live after many listenings of their albums (e.g. The Children of the Night, 2015, Century Media). Proud, because I was born in Karlstad, Värmland, and we spent many wonderful summers just outside of Arvika. 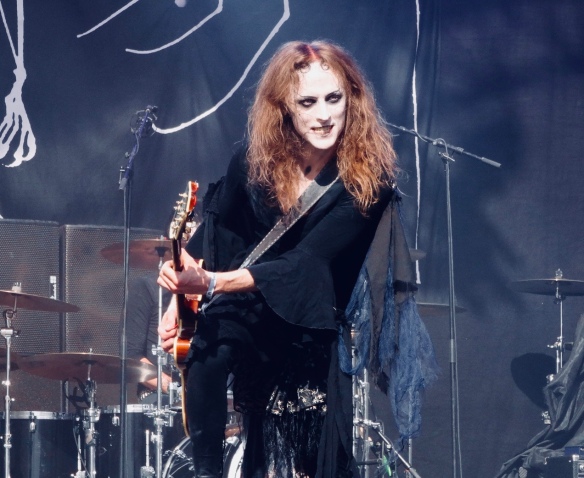 Tribulation are Jonathan Hultén, Adam Zaars, Johannes Andersson and Jacob Ljungberg. Thank you for a great performance! With your darkness and great black sound you balanced the heat and sun this early afternoon. We hope to see you somewhere in the metalsouth region very soon. 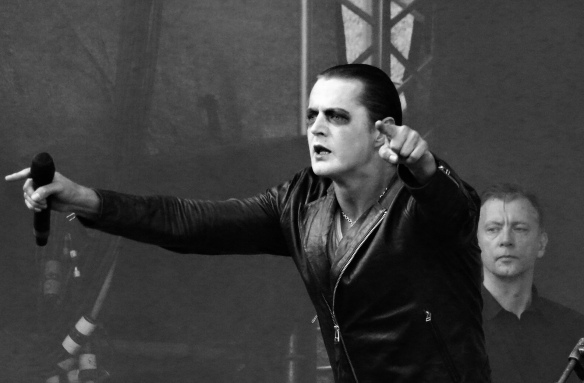 Norwegian black metal at its best! The darkness set by Tribulation was concretely bridged into the performance of Satyricon. The band formed in 1991 was a first live experience for us, but gave a wish for more. To see more of their strong visuals and experimental shows is now on our list. Also here the light and sunny afternoon makes the demands on the show harder, but we are happy that musically it was super good! 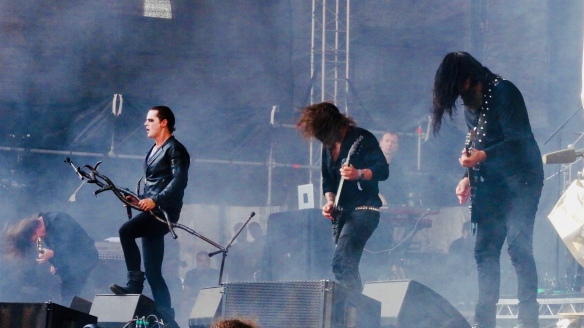 Gothenburg has produced many great bands and this festival makes this concrete in its band list. Graveyard is the next in line and was formed in 2006. The band we have covered in an earlier post from The Tivoli in Helsingborg. That gig with Graveyard had Free Fall as support, which has a natural link to another band member and performance mentioned here later. Again Graveyard dominates and shows that their blues oriented rock is perfect at an evening like this! No direct talk with the audience, but the band connects to the big crowd via its excellent music. 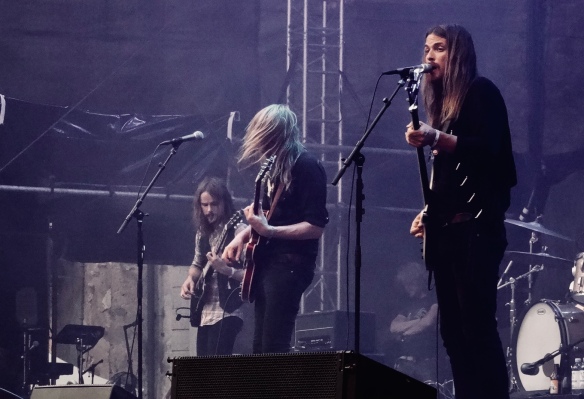 Graveyard members are Joakim Nilsson, Jonatan Larocca-Ramm, Truls Mörck and Oskar Bergenheim. We are thankful that Graveyard continues and we look forward to more record releases and great performances like the one at Borgholm Brinner. 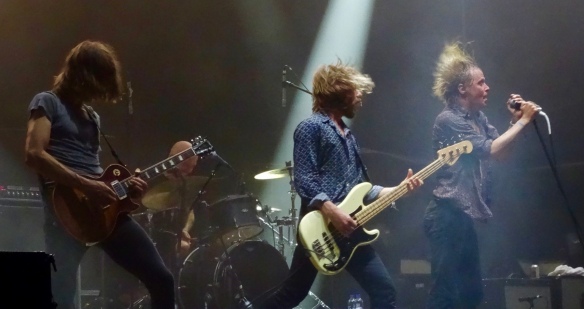 When Bullet For My Valentine unfortunately had to cancel Refused was announced as joining the festival instead. According to Dennis Lyxzén the question even though asked only two weeks ahead of the festival was impossible to ‘refuse’. We at metalsouth with tickets already acquired since long celebrated this addition to the band list. In an earlier post from KB, Malmö, Refused are celebrated for the intense and energetic performance only they can do.

Yes, Mattias Bärjed’s band Free Fall supported Graveyard at the described gig at the Tivoli, Helsingborg. Mattias was the guitarist of The Soundtrack of Our Lives and has since the band stopped (2012) been active with other bands and not to forget his own Free Fall. He has also in his own name composed soundtracks of films like Gentlemen (2014) and Call Girl (2012). Since a few years Mattias has toured together with Refused and we were so happy to see him enter the stage at Borgholm Brinner.

Refused are so intense on stage and Dennis Lyxzén’s ‘acting’ on stage falls in line with the  punk oriented hardcore sound the now close to filled up court yard experiences. He moves, dances and juggles with the microphone together with a band who gives it all and has great fun on stage. 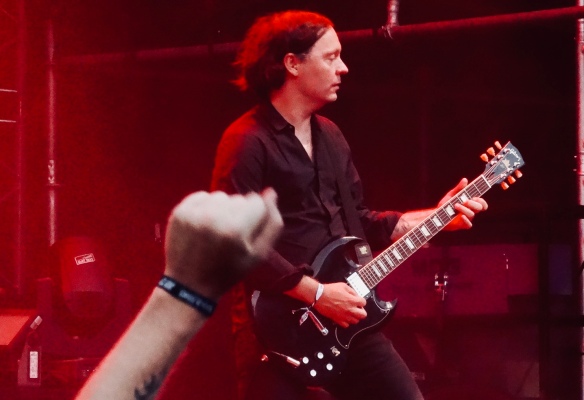 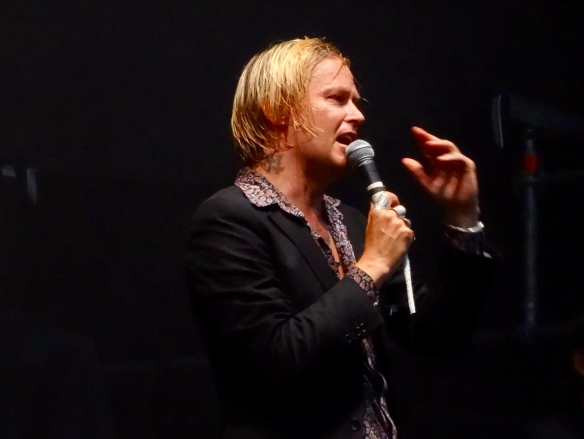 Refused are Dennis Lyxzén, David Sandström, Jon Brännström, Kristofer Steen and also for this evening Mattias Bärjed. The bands political views are clear in their lyrics and  in Dennis Lyxzén’s introduction with a question, if we in the audience were ready for some ‘revolutionary rock’. He also towards the end of the performance took the opportunity to thank In Flames for the invitation, but with a challenge in that no women or women bands were to be found on the festival stage. A feeling in our minds was clear that this will probably not be without reaction from Anders Fridén, In Flames front man and host of the festival, who was soon to enter the stage as the concluding act of the festival. The tension was in the air to see if there was to be a reaction. Still Dennis Lyxzén made us  at metalsouth immediately to think about candidates like Thundermother, VA Rocks and Arre Arre, as our particular favourites!

In Flames concludes the festival

It was time for In Flames to conclude the 2 day festival by performing again as the headline act. Many of us asked how they were to attract the audience again and not copy the Friday ending show. This had In Flames, of course, had thought through and planned for some Saturday conclusion gig surprises. At the intro, and for a couple of songs, a string quartet was on stage and made us ‘second time in a row goers’ very surprised and tempted to stay to the final end of the show.

And yes, Anders Fridén took up Dennis Lyxzén’s comment on no women being invited to the festival. He started by celebrate Refused as a band and Dennis Lyxzén’s dance-and microphone abilities. He could not himself treat a mic like that since his is wireless!!

Luckily or was it all planned??…a woman violinist (sorry, that we don’t have the name) showed up as member of the string quartet on stage and Anders Fridén turned directly to Dennis Lyxzén and now waits to see a female band member in Refused!! If the verbal battle between the two singers was planned or not doesn’t really matter. The festival was a success with the band list it offered and from this debate only gives room for more bands next year and hopefully for many coming years. 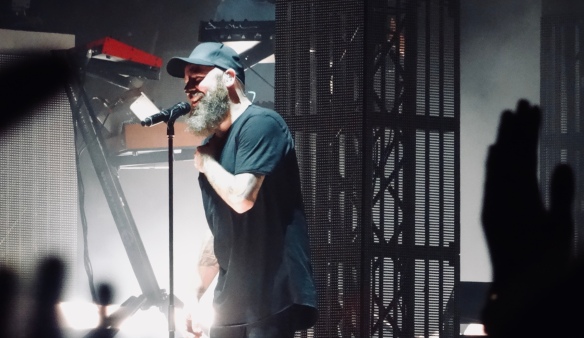 Musically, again In Flames performs as a world class band and we don’t need to go into details on song list. To be headline act two nights in a row demands a good long list of songs, which this band has! Anders Fridén was happy for the support and the ca. 9 000 sold tickets over 2 days must be considered a success. We can now only hope that the event also financially is a success to give In Flames the incentive to do this again. The Borgholm castle and the surroundings are just fantastic for a metal event. We would like to direct our outmost thanks for giving us the party of our lives over 2 days and we can only hope for a new gathering in 2019. Then maybe also with fireworks, barbecue possibilities and slightly less heat! 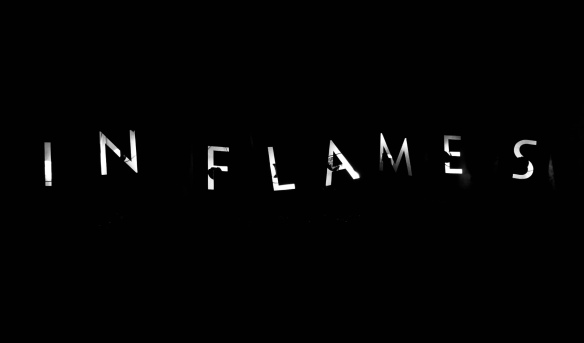 (sources of information: many thanks to Wikipedia and Metal-archives.com for being there)

The name ‘Borgholm Brinner’ (‘Borgholm Burns’ or writers translation ‘Borgholm In Flames)’ of the premiere festival on 27-28 July, 2018, hosted by In Flames is, of course, highly appropriate and the band list gave hope for some really hot atmosphere.

Borgholm Castle, one of the regions’s greatest tourist attraction, opened up its gates for some good music and the death metal pioneers from Gothenburg, In Flames, acted gate-and key masters for their first own festival over two days. King Karl X Gustav built it in the mid 17th century and is the only king who lived at the castle for a longer period of time. 1806 the castle was destroyed by a fire and today only limestone walls are left, but attracts tourists and is at times opened up for concerts, which many are classics in Swedish live music (source, and pls, see more at http://www.borgholmsslott.se).

A fantastic place for some heavy music and we can already here, mark it as a top arrangement, which creates hopes for a new festival in 2019 and years to come! The tropical heat which has hit Sweden this summer put some extra demands on the arrangement when it came to cooking of food, water availability and usage of more technical visual effects on stage instead of fire and fire works! It was all very adapted to the circumstances and great many thanks to In Flames for making this weekend in late July very memorable.

A very welcome return by this Canadian 3 man band. Danko Jones is earlier covered by metalsouth from their Helsingborg gigs at the Tivoli. Danko Jones still writes highly appreciated chronicles in Close-Up magazine every month. All 10 album releases over the years are with the Swedish record label Bad Taste Records (Lund, in the centre of the metalsouth region). As usual Danko Jones speaks with the audience rather aggressively between the songs. It’s fun to listen to and gives a good spice to the already great performance. Danko Jones e.g. labelled this first day of the festival ‘the Swedish-Canadian Day’ since all bands were from these 2 countries. The first Canadian  band performing on the Friday was Come Back Kid. 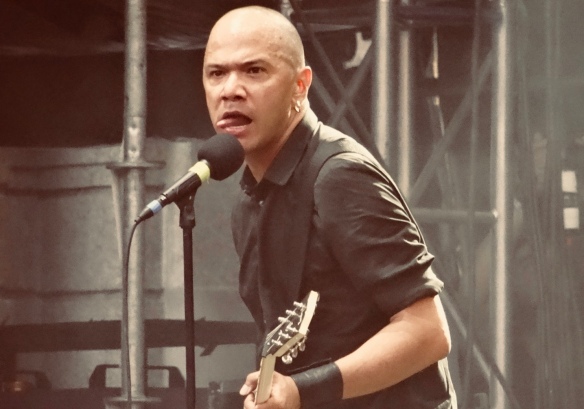 Another Swedish Band invited by In Flames, which meets the highest wishes for a band list of us at metalsouth. This band has also been covered and their performance this warm and sunny day brings back good memories from KB, Malmö. Like In Flames this band started its career in Gothenburg in 1989. The 1990’s was the decade when Swedish metal bands developed into world class and In Flames, Dark Tranquility and At the Gates, all from Gohenburg and representing what is called ‘the Gothenburg sound’ within the death metal genre. At The Gates would be a great candidate for next years festival, which is highly hoped for! 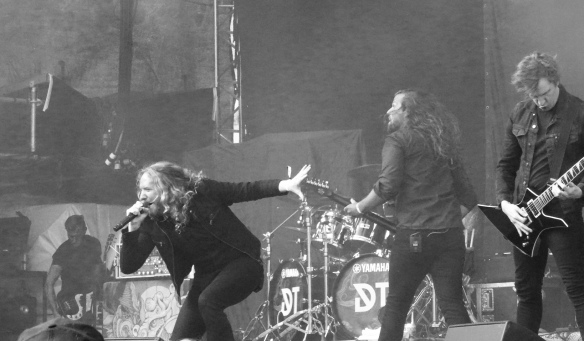 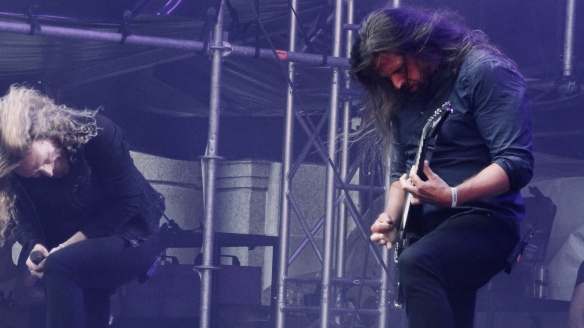 With Raised Fist the temperature raised by the sun setting over Borgholm Castle. The band was formed in Luleå 1993. Alexander Hagman, singer, made no one disappointed in an, as alway, super energetic stage performance. One great story was when he talked to the, by this hour, ca. 4 000 person audience and asked the guy who earlier wanted a selfie with him and asked kindly if this could be done after the gig below the stage at the In Flames Gin tasting queue. When we were standing in the same line for almost 30 minutes (the gin was great!!) Alexander showed up and the guy waiting got his selfie…and quite a few more took the opportunity!!

The host of the festival needs no further introduction. A few days before the festival it was announced that ticket holders were welcome to a small club in Kalmar to warm up with some good music. The rumour spread that it may be In Flames themselves, which was true and ca. 300 could see the band warm up before the festival, and say no more…we wish we would have been there to make this festival experience complete! Congratulations to those who were!!  Expected and normal fire and fire works at an In Flames gig was not possible due to the tropical heat and drought that Sweden has experienced this summer. This put extra demands on their performance. Spectacular graphical-and digitally mastered effects replaced fire in a quite good manner. It would be interesting to know which was cheaper costwise! A really good show with new and old material, which rendered high marks (4 out of 5) in Swedish press the next morning. 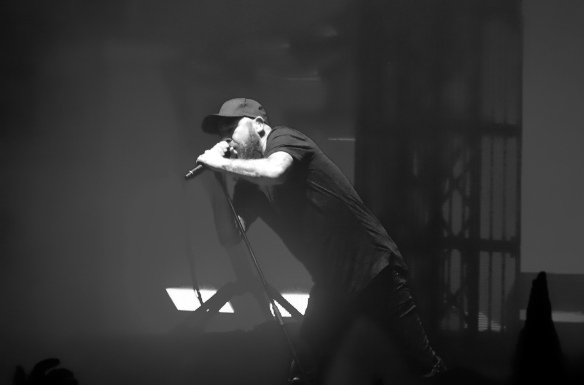 Please, be patient for material from the 2nd day…’In Flames with Saturday Guests’!

(sources of information: thanks to Wikipedia and Metal-Archives.com for being there.)