This post was prepared to pay tribute and express happiness over the latest release and yet another fantastic album of Soilwork, ‘Övergivenheten’ (‘abandonment’/Nuclear Blast 2022). The devastating news on David Anderssons passing at only 47, on Sept. 14, 2022, reached us and we now lack words to express how much this hurts. We would like to say ‘thank you, David’ for all the happy moments you together with The Night Flight Orchestra and Soilwork has created for many people and for us personally. We would also like to send our deepest condolences to David’s family, friends and fellow band members. As have been announced by The Night Flight Orchestra (e.g. via Bandsintown, Sept. 17, 2022) ‘The legacy continues…’ and the planned mini European tour in Nov. ‘Death to false AOR’ will take place. We will take up the recommendation ‘to join the band in celebrating David’s life and music and dance the night away’. When the next gig stop is Helsingborg or Malmö we will be there. Vila i frid, David! / Rest In Peace!

As very often these days my thoughts go to my teenage boy’s room during the 1970’s with the small collection of LP’s and EP’s. BUT, it was only on its initital stage to be built up to a pretty substantial collection. LP albums at that time purchased at ca. 70 SEK (7EUR). Today, 40 years later, I can buy a used CD at the store of http://www.roadhouze.records for 79 SEK (8 EUR). I can also download a new album from Itunes for ca. 90 SEK (9EUR). Can anyone complain over prizes on good music today and can anyone refuse to pay for it??

I got nostalgic this evening I just picked out one of my of my absolute favourites from the Danish rockband Gasolin (1969-1978). I came in late in their career with the live album ‘Sådan’ (CBS Inc. 1976). It had a huge effect on me (just listen to songs like Good Time Charlie, Splittergal/totally crazy, Kvinde min/my woman and Hva’ gör vi nu, little du?/what do we do now you, little you (excuse the fantastic translations from Danish to Swedish and over to English!

Kim Larsen (song and rythm guitar), Franz Bekerlee (guitar and song), Wili Jönsson: Bass guitar, piano and song) and Sören ‘Charlie’ Berlev (drums) were my heroes. I even went to see them live in Malmö Folkets Park (the People’s Park) in August 1978, which was their last live performance. I can only regret that I came so late into their career, but what can you say…a bit poor planning of my parents, or was it planning???

I would hereby like to challenge all to take the same ride and listen to the album and proposed song. I would also like to challenge the members in all metalsouth mentioned bands…Soilwork, Darkane, Black Temple, Mörbultad, Riot Horse, Kayser, Free Fall, The Night Flight Orchestra and many more that you haven’t been inspired by these 4 fantastic Danes when it comes to the styles you have developed, which have contributed to where you are today. Challenge accepted??

These guys from Christianhavn in Copenhagen, Denmark, are metalsouth in real and pure origininality and quality! I found that out his evening!! I’m happy for this trip on a Wednesday evening…and an evening before a public holiday of tomorrow… Ascencion Day.!!

When The Night Flight Orchestra had performed their last song as the last band of the new three day A World of Music Festival at the Tivoli in Helsingborg on March 29 Goran Raber of ABF (Arbetarnas Bildnings Förbund) as the initiator was called up on stage by Björn Strid. Lots of hugs and standing ovations for Goran’s work to make this idea come true were passed on. By his work totally 20 local bands were given the chance to perform before us happy hard rock-and metal fans. Today some of us can only regret that we didn’t see all of these bands for golden discoveries of more established, but also very new and fine productions. Below will follow some chronological  impressions of the bands, which we happily experienced during the Friday-and Saturday evenings.

(An inspirational article to the posts related to the Festival was published in Helsingborgs Dagblad March 18, 2014, and written by Stefan Lindqvist)

They have been mentioned as a Supergroup with band members from Soilwork (Björn Strid: vocals, David Andersson: guitar), Arch Enemy (Sharlee D’Angelo: bass), Von Benzo (Richard Larsson: keyboards) and Mean Streak (Jonas Källsbäck: drums). For all of us at the Tivoli this night the moment of seeing them together is strong. Growing up with and learning good music during the 1970’s meant musical discoveries as Deep Purple, Black Sabbath and Led Zeppelin. Many in the crowd this evening made references to early days Deep Purple. The Night Flight Orchestra’s only album so far ‘Internal Affairs’ (Coroner Records, 2012) got really good reviews in local press. It was mentioned as a candidate to ‘Best hard rock record of the year’. When the vote was there for 2012 they were nominated in certain press, but didn’t go all the way. All the members in the band give proof of strong musical competence and to hear them play so well together is a pure joy. As a dedicated Soliwork fan it’s in particular gratifying to have Björn Strid singing more traditionally just confirming the great singer he is with a bandwith of infinite capacity. Thanks to The Night Flight Orchestra and thanks to Goran Raber of ABF and Amnezia for making this Festival happen. We can only wish for a repeat next year! This town, this region is so metalsouth!! Let the pictures speak for themselves! 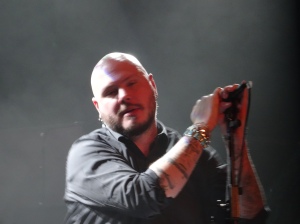 On Thursday March 27 the 3 day Festival starts. Totally 20 bands from the region and mainly from Helsingborg will perform on different stages at the Tivol in Helsingborg. Many thanks to the initiators of the Festival, which gives a great opportunity to meet with local bands and their music.

An why not buy tickets for all 3 days and take the chance to make new good acquaintances of local music strenght!

Yes, yes, February 17, the fantastic comeback album was released, which will be followed up with a gig at the Tivoli. The timing is superb giving us fans a possibility to build up a happy feeling for a great meet on May 24. Kayser will be supported by local Helsingborg band Outrigger, which became nationally known in Sweden as Eurovision participants with their song Echo. They did well and many phone votes were given by metalsouth. Can we call their style ‘Eurometal’?

Great many apologies from metalsouth on not actively promoting the fantastic tour these two bands just have finished in Europe. We can only hope that this collaboration with two of the finest representatives from the region will be taken up again. Help us out to inspire Soilwork and Darkane to do a gig nearby. Why not at the Big scene at Tivoli here in Helsingborg or at KB in Malmö. To have followed the bands via their respective Facebook posts have only raised the happy wish of seeing them together close by.

To read about not only fantastic performances, but also stories like the one when the Master drummer Dirk Verbeuren in Soilwork fell ill for the concert in Bristol March 11 and Peter Wildoer intensly rehearsed the 16 Soilwork songs to perform firstly the Darkane show and thereafter Soilworks’ and as I understand with an excellence that only he can. It would have been extremely interesting to compare the differences in sound when one of the best metal drummers in the world temporarily was replaced by another world class drummer. You know your stuff when 16 songs are rehearsed and performed in such a short time. Congratulations to all who experienced this classic show and by the way…it’s great to see Dirk back on track again!!

Soilworks first recording of a live DVD in Helsinki March 21 is also creating some happy expectations. Floor Jansen from Nightwish partcipates. We haven’t been able to find out when the DVD will be released, but our focus is on the market!!

The next encounter of these bands and their band members will be at the Tivoli’s  ‘A World of Music Festival’ the upcoming weekend when we can see Björn Strid and David Andersson from Soilwork performing with A Night Flight Orchestra on Saturday March 29. More on that under Upcoming events.