We came there to see Odyssey perform in a name change event. ‘It’s the fourth time we change names and each time it feels better’, Jonas Pedersen stated. Odyssey is now ‘Black Temple’. I can see the identity problem of the name Odyssey with a number of bands with this name all over the world. To search for Odyssey songs at streaming suppliers takes some time to hit correctly. ‘Black Temple’ as a name sounds right, the band logo is again stylish and if the sound is better…? Well, it was cruel, hard and noisy as Odyssey and Black Temple continues to work hard and collects another victory this evening.

Marcus Witold Östensson (guitars), Jonas Pedersen – (bass, vocals) and Jesper Karlsson (drums) give it all they have. Body and soul. This ‘hard noise rock’ gave me body ache like the worst gym session. I haven’t had my head ringing and my body aching from a live performance like this in a long time. Songs like ‘Wicked Witch’ and Abysmal Despair’ from the CD with the same name (2012) gives me the feeling of just wanting more. 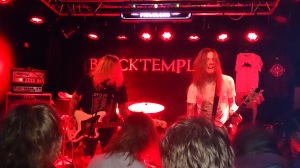 More is to come…and to have the rumour confirmed that Black Temple will be the supporting act to Bombus on their European Tour during Nov-Dec this year only makes this heavy metal weekend even more perfect. Let my head keep ringing to rememer this great weekend! Another t-shirt reference must also be made here. I could only happily notice that Jesper Karlsson on drums started the concert in a Frank Zappa t-shirt (picture of ‘Chunga’s Revenge’, 1970), which triggers ideas and bridging over to other personally interesting subjects for this blog. Many thanks to Black Temple and the best of good luck for the coming tour in Europe!! 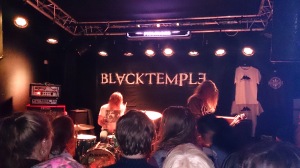 Actually, our wish was to enter the Metal Bar on the Saturday evening October 26, just in time for the Odyssey performance. The last time with the old name and the first with the new name Black Temple. After a good meal at the Pub Ro in the Helsingborg North Harbour area, we entered the Metal Bar at ca. 23.00 only to see a band of young guys with a pretty funny and a bit strange name ‘Drivvedsfolket’ (hard to translate, but, something like…the Driftwood People) enter the stage. Drivvedsfolket is Johan Lindman (guitars, vocals), Carl Lindman (drums), Daniel Ringlund (bass) and Christoffer Columbus (guitars). This band stems from Norrköping and plays character strong pop rock and all lyrics are in Swedish (acc. to their homepage). We were surprised to see how well they performed. Great energy an definitely here gets an honourable mention with many good lucks for the future.

Supporting act to Danko Jones was Bombus from Gothenburg, which was formed in 2008. Two full length CD’s the band has released. ‘Bombus’ (2010) and ‘The Poet and the Parrot’ (2013). Yesterday evening we were honoured to have the band on main stage at the Tivoli in Helsingborg.

Bombus bombardment in songs like ‘The Poet and the Parrot’ and my own favourite ‘Cut Deep’ set the mood of the Tivoli floor. It wasn’t packed during their excellent performance, but Danko Jones fans arriving gradually found an interesting meeting in this coming Swedish hard rock band. The at times ‘punk’ influenced songs we understand go very well in line with Danko Jones repertoire. To be able to see Bombus’, i.e. Feffe (guitars, vocals), Jonas (bass), Matte (guitars, vocals) and Peter (drums), tour plans for this coming November and December in Europe gives me, and I hope many more, a great urge to see them in a full length concert. As we discussed Friday, just before Danko Jones was to enter the stage…Bombus three last songs were cruel and another half hour with them would have put some extra pressure on the evenings main act from Canada.

Sold out!! It stated on all posters over town. In Helsingborg with 132.000 people, not all being metalheads, unfortunately, it isn’t very common with a sold out event like this. For a change I bought the tickets many months in advance, since the combination of Bombus, from Gothenburg and Danko Jones was very interesting. The Canadian band Danko Jones (formed in 1996) has a special relationship to Sweden since all released five studio albums are from the Swedish record company Bad Taste Records. The band consists of Danko Jones (guitars, vocals), John Calabrese (bass) and Rich Knox (drums).To have secured my tickets in time was my lucky shot. Danko Jones not only filled the house. They rocked the roof out of Tivoli! AND it was Friday October 25, 2013. 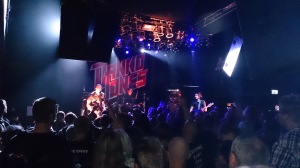 Danko Jones I saw for the first time live at the Metaltown festival in Gothenburg this passed summer. Not only the band’s live performance was great, but to listen to Danko Jones talking to us in the crowd between the songs gave a lot of good laughs! ‘After all these years playing at Metaltown we now understand why we keep on getting invited…it’s only to give all of you metalheads a break in the massive sound attacks of the other metal bands here at Metaltown’ (as one example of Danko Jones’ comments). Also at the Tivoli yesterday he provoked parts of the audience only to take it back before leaving the stage. Danko Jones has played the Tivoli since 2002 and has here the faithful group of fans to sell the place out! His monthly chronicles in the Close-Up Magazine are always great to read and gives a good ground to many laughs and knowledge building in this field.

No further reviews or marks are necessary. It was excellent! It was the perfect rock night out in Helsingborg. Please, continue to come to Helsingborg and sell the whole place out again and again!!

Tomorrow Friday October 25, we welcome Danko Jones with support of Swedish band Bombus, who play at the main stage at Tivoli here in Helsingborg.

On Saturday October 26, we really look forward to see Odyssey play at the Metal Bar, also at the Tivoli. It’s the last performance with the Odyssey name. Black Temple will be the new name.

It will be a heavy metal weekend, but how heavy happy this is!!

On Saturday October 5, Darkane was back on stage at the Metal Bar (Tivoli) in Helsingborg. Five years have passed since the band released an album and to be back on stage to play most of the songs from the Sinister Supremacy release from this year put some pressure on the band members and some great expectations in us fans who were there to meet Darkane live again. 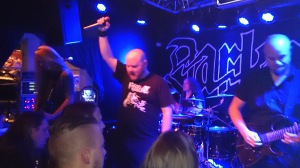 The album has been met by great reviews and personally I think it’s the best of the six albums they have released. The introduction of the new beer ‘Darkale’ from the micro brewery Helsingborgs Bryggeri was another reason to be at the Metal Bar in good time before Darkane was to perform. The Metal Bar opened at 20.00 with a promise to have Darkane on stage at 22.00. We were there already at 19.30 in order to secure some space in this smaller establishment housing approximately 200 people. Too early we were there, but only to be met by band members Peter Wildoer (drums) and Christofer Malmström (guitars) shaking our hands and wishing us most welcome. What a welcome and what a great feeling of being really close to the band’s music! I have followed their career via the CD’s, DVD, reading articles and reviews and here I am discussing the new beer with Peter Wildoer, to which Darkane has lent part of its name and logo type. An irrelevant comment here may be that the Darkale beer was most drinkable an can be a huge success. 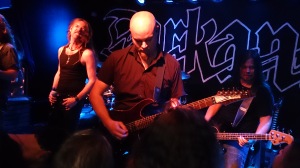 Darkane dominates!! At the regular Darkane slow intro with Peter Wildoer entering the stage, sitting down at the drum set giving a deep sigh we can see that some thoughts are there on how this will go. BUT, from the first strike Darkane is back and the one hour performance is incredibly intense and hits us in our faces massively.

Finally, I must also mention and thank Klas Ideberg (guitars), Jörgen Löfberg (bass) and Lawrence Mackrory (vocals) in this great performance. Lawrence Mackrory is back again on vocals. He did vocals on Darkane’s debut album ‘Rusted Angel’ (1999) and with this fantastic comeback we can only hope that he will be a stable factor of the sound that the band currently gives. His t-shirt stating ‘Nihilist’ directs our thoughts up north to Stockholm where Nihilist towards the end of the 1980’s (1987-1989) set the base for the current band Entombed, which surely will be mentioned later at this blog.

A big bonus was given to us when the previous Darkane singer Andreas Sydow (currently with Riot Horse) entered the stage and did Chaos vs. Order together with Lawrence Mackrory.Thank you to Darkane for a great performance and we look forward to seeing you again at Kulturbolaget, in Malmö, on December 8, 2013.

Welcome to Metalsouth in Helsingborg, Sweden.

‘Never underestimate the therapeutical power of driving and listening to very loud music’. When I saw this sentence only a few weeks ago I had to laugh, because this is what I often do in order to wind down after a day’s work with a lot of numbers and hours in front of the PC. The intensity of the music and the effect on body and mind has become a way of living, a way of surviving and the keeping of all sorts of ghosts out of my head. The cleansing that takes place gives room for positive energy and all sorts of happy thoughts. Hard rock and heavy metal gives me a positive inflow of energy and makes me happy! For that reason, I have many musicians, lyricists and bands to thank for contributing to a fruitful and happy life. For that reason all musicians, lyricists and bands, who are mentioned here will be mentioned in a positive sense. A simple way of giving a thank you back and with the hope that maybe someone else may find some of my roads worthwhile walking. The start and initial focus of this blog will be geographically located to the south of Sweden, to the town of Helsingborg and its surroundings. After many years of listening starting during the 1960’s, but maturing in taste as a teenager in the harder form of rock and the development of metal during the 1970’s I have recently wandered musically around the world for good music only to land at my own doorstep finding the extremely high quality produced heavy metal with its roots in the area. It will be south of Helsingborg where this journey starts.