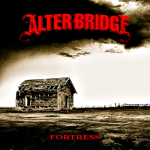 After another intense period of work, meaning frustration over not being able to maintain my main interest of great hard and loud music I ‘forced’ myself to order the since a few weeks released Soilwork Live in Helsinki DVD. When opening up the http://www.ginza.se site to place my order I just came to think about the 2013 Alter Bridge release ‘Fortress’. Alter Bridge has been on my best band list ever since my good and knowledgeable colleague recommended them a few years back. I was shortly thereafter and experienced a stunning live performance at Store Vega in Copenhagen, November 10, 2011. Myles Kennedy made a permanent impression in me that evening. Everyone knew that he had been struggling with an infection, but still running through the listed tour gigs and the evening before in Gothenburg, Sweden. Black Stone Cherry supported and were in a fantastic mood and made the whole building happy. When Alter Bridge came on stage some tension could be felt and Myles Kennedy had some problems…it was obvious. After an stumbling introductory song ‘Slip To The Void’ Myles turned to the audience and apologised and added: ‘I have some shit with my throat, I will do my best, but what the fuck…you will help me, won’t you!!! The respons was so massive I felt the roof would pop off Store Vega. It was the hard working hard rocking artist in a hard working band who spoke and still did the best he could for the fans. The week before our daughter’s highly expected and wished for concert with Rihanna was cancelled just before they were to enter the arena. The comparison needs no further saying.

The Album Fortress is Alter Bridge’s fourth studio album and it’s lifegiving!! It’s to be noted after a few listenings how well the songs are built up, paces are shifted, instruments and singing are concrete and clear. I can only smile when song after song is built up after fantastic intro’s. Each song stands alone and altogether make an astonishing album product when the order of the songs are well planned. If one song is to be picked in order to picture this analysis it will have to be Track 5 ‘The Uninvited’. No comments – just listen and enjoy!!