First time ever on November 6, 2015, at Tap 1, a neighbour of the Carlsberg brewery and most likely the last. The arena, which is more of a ice hockey hall sized building is to be torned down and replaced by a permanent establishment.

Devil You Know, Papa Roach and Five Finger Death Punch to celebrate this fantastic evening, which is also the J-day, when the classical Christmas brewed beer, the Snowball, is released at 9:00 p.m. Copenhagen goes beserk when trucks deliver the beer to pubs and restaurants all over town. On the following Saturday morning Copenhagen smells of one physical condition: HANGOVER!

Great performances by the three bands, but Papa Roach burns the best memories into our bodies. A not completely new experience, but an awakening to a band which gives alternative rock/metal a concrete name. Papa Roach delivers a smorgasbord of drum strong beats, great singing, rap and freuquent guitar riffs. Over he last few years the band has moved in the direction of a harder and more metally sound.The morning after during a must visit to the Sex Beat Records store at Studiestraede 3 most people there agreed upon Papa Roach’s fine performance. CD buys of their latest album F.E.A.R. (Eleven Seven Music, 2015) and The Connection (Eleven Seven Music, 2012) were unavoidable.

Five Finger Death Punch is spectacular and their latest album Got Your Six (Prospect Park Music/Eleven Seven Music, 2015) a Billboard top listing over the first week after release was well represented. Some complaints over long breaks between songs, but this was most probabaly connected to the high price of the beer. A replacament of Tap1…we hope the alternative doesn’t take too long to construct…can be good. The hall’s too big to give the good feeling of nearness of a smaller club like KB, Malmö, and too small to give the arena feeling. The sound is this evening still very good and we are happy to have visited Tap1 at least this once. 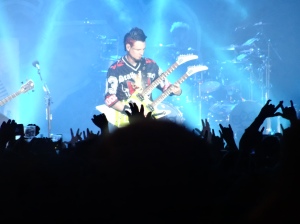 (Inspirational article by http://www.gaffa.DK /John Mortensson and an after concert chat at the Sex Beat Records store at Studiestraede 3 in Copenhagen, http://www.sexbeatrecords.dk) 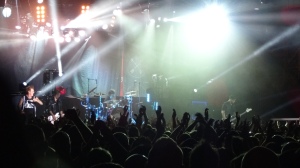 Merchandise: Got Your Six T-shirt for DKK300 (EUR40) is on the more expensive side of comparable band T-shirts. Still it’s a winning candidate at the next hard rock costume party! 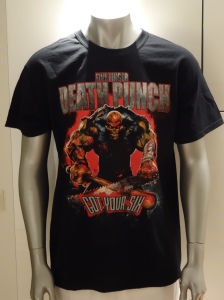 Thanks to good friends for arranging this memorable weekend. Thanks to Copenhagen and it’s a privilege to live so close to a fantastic and culturally rich capital situated in the metalsouth region. To come back to the Snowball Beer release next year will happen independently of a heavy metal gig or not!